PhoneWorld VoIP subscribers can also call securely from any Swiss Mobile via the internet. IPCall Mobile has the LOWEST cost for making a mobile phone call from/to anywhere in the world. Irrespective of worldwide location, Swiss landline calling rates apply when in a WiFi (WLAN) environment.

PhoneWorld will guide you on how to install an IPCall Mobile APP on to your Swiss smartphone (see below). The App can be installed on any mobile (i.e. Swisscom, Sunrise, Salt, etc.).

How to get on to the PhoneWorld IPCall Mobile program 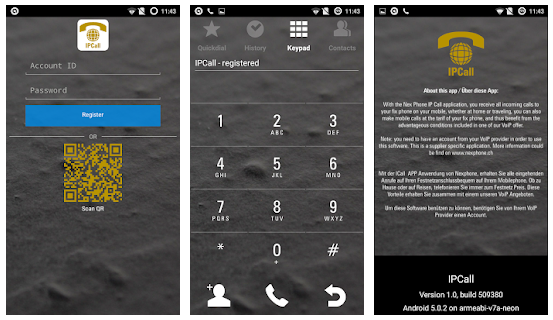 HOW TO INSTALL THE PhoneWorld IPCALL APP ON YOUR MOBILE

(For all smartphones and networks)

Carefully follow these instructions to install the PhoneWorld IPCall app on your smartphone:

Consider the PhoneWorld IPCall service an extension of a Swiss landline. Make and receive calls from anywhere in the world and benefit from low Swiss landline prices. IP calling is cost effective. It eliminates all roaming charges. You can even record your conversations.

Security: The IP call mobile system is based on a Swiss landline connection. It is exactly the same as if you were using your home/office fixnet. Thus itis NOT an unsecured connection like experienced with social media or most other IP dialing systems.

While IPCalls via Wi-Fi produce hardly any radiation, the IP call app can also be used as a regular mobile through 3G/4G when not in a Wi-Fi environment. Consequently, in those cases similar radiation impact exists. Read 15 Ways to Minimize Cell Phone Radiation Exposure and Harmful effects of mobile phones on children.